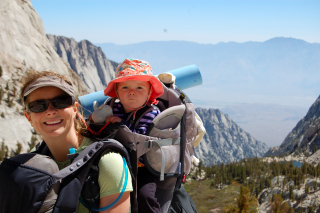 In 2005, Rebecca and I did a kayak assisted trip down the headwaters of the Kern River.  Seven years later we decided to return, this time with our daughter Maggie.  As we passed folks along the way we noticed a variety of responses.  Some were enthusiastic, some were clearly not, most did not believe they were seeing a baby strapped to her mothers back in such a remote location.  I guess the question is why?  Why take a baby out on the trail for 11 days.  It is no easy task and there is a lot that can go wrong.  I figured I would take you along for the journey to see for yourself.  Maybe we will learn something along the way...


Like most of our adventures, this one started a little late.  We had work to get done at the brewery in the morning (go figure, it turns out that leaving your business for 11 days with no hope of communication is a big deal).  Of course there was the standard scrambling:

We shuttled all of our stuff over to Marc's house to meet the van.  Our compatriots of camping Ann, Andrew, Dave, Allison and our intrepid shuttle driver Mike were all ready to go, and at the crack of 2:00 pm we hit the road.  I'm sure Mike wanted to lecture us on the enormous irresponsibility of our actions, but decided against it; an "I told you so" moment wouldn't have been good for anybody.

The Carl's Junior in Lone Pine would be our last stop in civilization for almost 2 weeks.  We had made a last minute adjustment to do the short hike into Lone Pine Lake up Whitney Portal and camp there instead of camping at the trail head.  This would give us a much needed head start on summitting the pass the following day.  It also meant that we did not have enough food, so we decided that a super-sized value meal was going to be a good break from the many mountain house meals that were to come.

At the trail-head we packed our substantial belongings and supplies; the plan was to get resupplied with a helicopter that would be bringing boats in on day 6, but the recent "George" fire has made that occurrence somewhat uncertain.  Since we were not going to be very adaptable in the case that the resupply fell through, Rebecca and I elected to take all of our food with us from the start.  The scale at the trail head pointed out the folly of our ways.  After enviously watching our crew's packs weigh in it was our turn.  My pack was in the vicinity of 65 lbs and Rebecca's pack (with passenger) was around 55 lbs.  Not the best start for folks better suited as kayakers.


After a short period of laughing and pointing of fingers, we began the slow climb up to Lone Pine Lake, taking the obligatory photo op a the Wilderness Boundary.

We did get a few funny looks from passers by; some at Maggie and some at my greasy Carl's Jr. bag I was carrying.  Maybe they were just hungry. 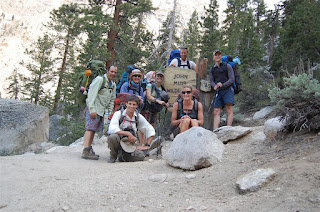 The short hike to the lake was pleasant enough.  Since it was late in the day the weather was cool and the short jaunt with the heavy packs was enough to let us know that, while it might not be pleasant, we could probably get the weight over the pass one way or another.  Maggie seemed pretty content and we talked at each switchback (parents who hike with kids in a pack will understand this phenomenon).  The lake itself turned out to be a great campsite with a creek running nearby (the preferred water source).  And as we set up camp for the evening and enjoyed a hearty meal of bacon double cheeseburgers and chicken sandwiches we got to bask in the anticipation of what would certainly be an amazing journey.  Of course Maggie (also known as "The Pi") was fairly zen about the whole thing, preferring to play with sand and sticks rather than get too worked up about it.